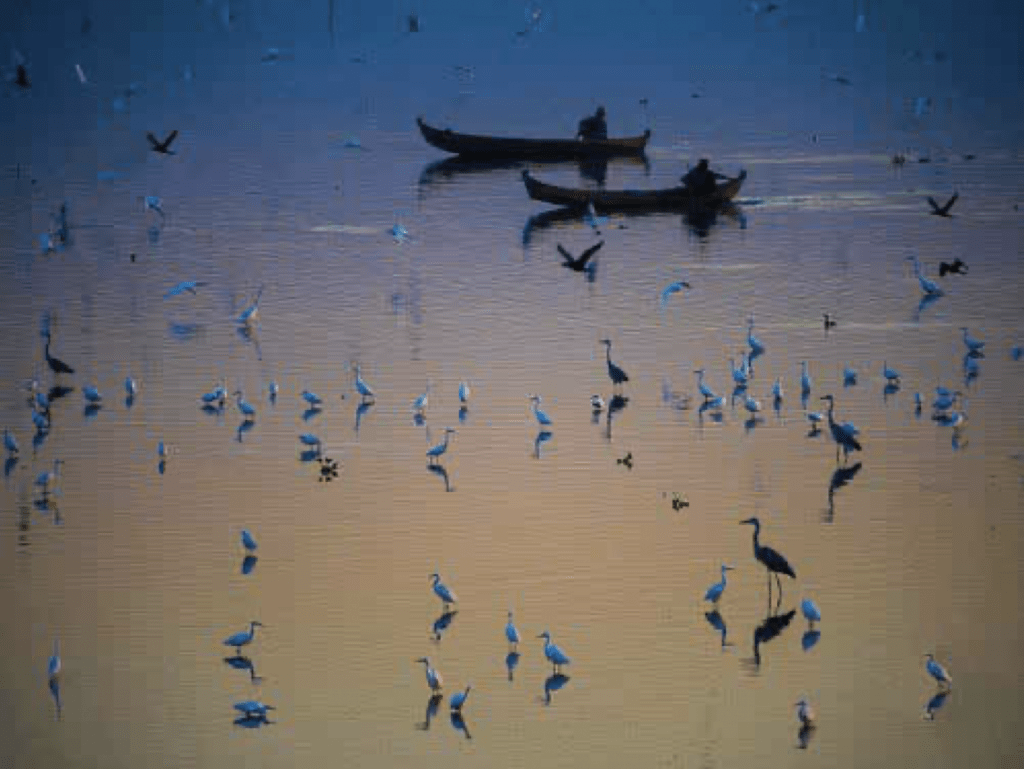 Senryu poems are different from haiku. Although both Japanese poetic forms follow the traditional 5-7-5 structure, their focus of attention is different. Haiku tend to be meditative observations springing from the contemplation of nature. Senryu, by contrast, tend to be more earthy, occasionally acerbic commentaries on human life, human relationships, and behavior (including mis-behavior). Life in the W.C.C.A assembly center, with its attendant uncertainties and anxieties was naturally the focus of attention for the senryu recorded in our manuscript.

The poems were composed at a series of senryu-kai held regularly at the center. Senyru-kai and haiku-kai are essentially social gatherings where the members each contribute their own poems. The poems are sometimes composed independently, sometimes in a sequence. Quite often, contests are held where winning haiku or senyru are selected by a panel of judges or sometimes by a vote of the attendees.

Gatherings at the assembly center were organized by the internees themselves Their purpose appears to have been twofold – to maintain morale by holding social events that would provide both enjoyment and shared experience, and also to give the internees an outlet for expressing their feelings.

Jonan, who was already an experienced poet, served as one of the key organizers as well as the secretary who recorded the poems in the manuscript that came into our possession. This must have entailed a certain amount of risk, because possession of documents written in Japanese was strictly forbidden. One internee was not even allowed to bring with her a copy of the Man’yoshu, a classic anthology of poems from the earliest period in Japanese literature.

Many of the poems in this manuscript were written by Jonan himself. We have also been able to identify several other prominent poets, including Shinjiru Honda, Kaoru Kurokawa, Kyokuo Iko (Yakima, WA), Toyoko Tamura (Powell Valley, OR), and Katsuhiko Shimizu (Yakima, WA), who had published independently or organized local Japanese language poetry groups in the decades prior to WWII and after.

The poignancy of uncertainty and anxiety was quite palpable, even in the very first poem we looked at, which turned out to be one of Kurokawa’s.

We were touched by these poems from our very first encounter. But now, in the isolation and confinement necessitated by COVID-19, our experience of these poems has evolved from a detached sort of empathy into a deeper appreciation for our shared human predicament.

Though our current situation in no way compares with the injustices and discomforts experienced by the internees, some parallels do exist – not being able to hug or even visit our children and grandchildren, not knowing when we will be able to resume normal life, ignorance of our ultimate fate. The feelings expressed in these poems take on a new urgency, one that we all share, and one that we hope every reader will be able to appreciate.

The writers of these poems are ordinary people, trying to make the best of the unbearable. Instead of the delicate themes typically associated with Japanese haiku, feelings are often expressed directly, with a raw and sometimes caustic intensity. But this very intensity is what makes them so relevant today, and presents the opportunity for us to share deeply in the emotions experienced by those internees nearly 80 years ago.

A sense of loss and nostalgia for what they left behind pervades the poems. Occasionally this nostalgia relates to specific places, as when two internees from the same home town in Japan encounter each other:

your neighborhood?
from the same home town –
memories

Even the sight of the world beyond the Assembly Center could be enough to produce nostalgia for the freedom they had previously known:

More often, however, the nostalgia relates to friends and family whom the internees fear, often with good reason, that they will never see again:

no longer heard
their so happy sounds –
dad’s drunken songs

Nearly all internees treasured photographs of loved ones as a way of keeping their memories alive. Some would express their heartbreak through reference to these photos:

Perhaps most relevant to our present predicament, is the loss of contact with children and grandchildren.

Life in the Center

Life in the Assembly Center was not pleasant. The center itself was a re-purposed livestock
exhibition facility, and internees were herded into small stalls designed to more for horses and
livestock than for human beings.

Preparation of the facility by the military had been a haphazard affair, which compounded the discomfort. In one infamous episode, the residents were forced to endure an infestation of files which were attracted to the manure-laced dirt under the center’s hastily assembled plywood floor.

Of course, life for the Japanese-Americans did not stop simply because it was uncontrollable. Babies continued to be born. Mangers, which were still present in several of the stalls, were used by some families as cribs, in a painful parallel with the events of two thousand years ago that was not lost on the internees themselves.

grandmother too
awaits the baby’s first cry
all on edge

And of course there were the usual conflicts between parents and their teenagers. These tensions were two-sided, as the younger members of the camp are forced to adjust to the expectations of their more traditional parents in such close quarters:

my mother says
things are not so simple —
duty beckons

There is even time for a game or two. Tennis matches and baseball games were popular:

hot summer day
the pitcher wipes sweat
off his face

Uncertainties are often harder to bear than clearly defined hardships. And the new internees at the Assembly Center were faced with uncertainties piled on top of one another. The greatest uncertainty, of course, was that they did not know when the war would be over and they would be able to return to their homes.

More immediately, they did not even know where they would be shipped off to for the rest of the war. And for some internees who were considering repatriation to Japan, decisions like this were just too difficult to make.

Heightening the general anxiety was one incident in which the MP’s on guard shot and killed one of their own cooks, mistaking him for a thief. That may have been the impetus for the poem below.

my daughter –
I watch more closely now
since it happened

Friendships made in the Assembly Center might not even survive the next few weeks:

The accumulated anxieties caused some internees to express their readiness even for worst-case scenarios:

ten thousand miles I’ve come —
to be with you, ready
to die with you

And some of the older residents began to despair that they would ever see the light of freedom again:

it doesn’t matter —
father has already written
his final wishes

Reactions to their Situation

Internees found many different ways to cope with the conditions in which they found themselves. Some found distraction in everyday activities:

now I know why
she snuggles with baby –
troubles vanish

Some attempted to express their feelings with humorous irony:

even autumn
comes on command here
at the assembly center

While others resorted to more cutting and sarcastic commentary:

their free movie
such generosity
escapes me

There was also the temptation to regress into ways of coping from childhood:

for the toddler
security from a thumb –
a peace I need

It is quite common in senyru-kai for different personalities to take completely different approaches when considering a question. Two poets here offer different opinions on the question of why they were rounded up in the first place. The first appears to take the stated reasons for incarceration more or less at face value, and looks forward to exoneration:

The second, not without reason, takes a more cynical view of the entire affair. Unstated, but implicit in the poem, is the distinct possibility ulterior motives were at work in the decision to round them up:

they never asked
suspicious or not –
just put us away

Several of the most uplifting poems in this manuscript illustrate the ways in which internees came to terms with their circumstances and achieved a certain peace and optimism:

In some cases, we even see signs of what might be termed an interior transformation in the face of great obstacles:

Many of these poems display cultural values that are often attributed to the Japanese people – perseverance, patient endurance, and doing what duty requires. But what also clearly stands out in the variety of individual expressions is a kaleidoscope of basic humanity. The COVID-19 pandemic has impacted all of us around the world. Our reactions to these new circumstances have become similar in many ways – we have good days and bad days, positive and not so positive feelings. Yet somehow life continues.

In that light, these poems represent a tribute to the human spirit, in its near-infinite adaptability and its willingness to find a way to nurture and sustain life, and in some cases to elevate that life, even in circumstances so challenging as to border on the intolerable.

We offer these brief excerpts from the manuscript in hopes that understanding the life the Japanese-Americans led during their incarceration and the ways in which they learned to adapt may offer guidance to us in navigating our own set of challenging circumstances as we battle the pandemic and cope with our own isolation and confinement.

Authors’ Note: The translations in this essay are excerpted from our forthcoming book, which will include a wider selection of poems from the Assembly Center, as well as notes on the historical background and translation details required for understanding some of the poems. We wish to thank Ms. Satsuki Takikawa, who assisted in producing the initial translations of these poems. Mike would especially like to thank the late William Morlock, his high school teacher, who first brought this tragedy of the treatment of Japanese-Americans to his attention.