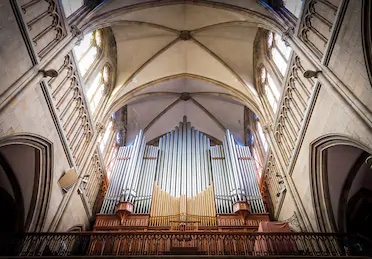 The year was probably 1970 or 1971.  I was a sophomore or junior in college, and I believe it was a Saturday.  My girlfriend and I decided to go over to Berkeley for the day, looking at shops and gawking at the “street people”.  Walking around the campus, I discovered a poster for a concert of gospel music.  Big Mama Mae Thornton was the headliner.

Now gospel music wasn’t ordinarily my thing, but for some reason I was seized with a desire to attend.  I went looking for a box office to buy a ticket, but they were already sold out.  That didn’t stop me however.  We went back to our own campus for dinner, and returned to Berkeley in the evening to see the concert.  I had this odd certainty that we would get into the concert, even though it was sold out.  And that’s exactly what happened!  I simply stood outside the hall and waited.  Eventually, just as if it had been pre-ordained, someone came up and offered us tickets that they were not able to use.

The concert was amazing.  What I remember most clearly was that Big Mama Thornton could fill the entire hall with her voice as she belted out one song after another, and then bring her voice straight down to a bare whisper, although even that whisper was as clear as a bell.  I, along with everyone else in the room, was mesmerized.

But the point of this story isn’t simply that I got to attend a nice concert.  The point is that I discovered a force that has played a big role in my life ever since – I call it “intentionality”.  If you form a very firm, unshakably firm, intention, then the world will often arrange itself so that your intention is fulfilled.  Once I learned how to use intentionality, I was able to put it to use in the service of larger goals – getting into grad school, and winning a scholarship to Japan  are two examples.

If you form a very firm, unshakably firm, intention, then the world will often arrange itself so that your intention is fulfilled.

If you’ve been reading the articles on this web site, you know that one of our persistent themes is that Heaven has a job for you to do.  And we’ve suggested ways in which you can try to find out what Heaven’s plan might be. This of course raises the question of...

END_OF_DOCUMENT_TOKEN_TO_BE_REPLACED

If you were to ask anyone for a list of the most pivotal years of the second half of the 20th century, I’d be very surprised if 1968 wasn’t at the top – or very near the top – of that list.  That year saw cultural clashes across the globe, with major ramifications. ...