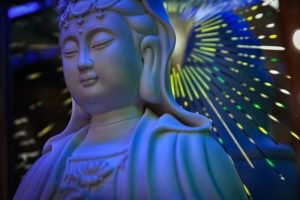 I once had a conversation with a seeker of a truly independent cast of mind.  Not being able to pin down exactly which tradition he was following, I cut straight to the bone and asked him – “So who is it exactly that you worship?”

“Heaven” was his reply.  Unwilling to let him get away with such a self-evidently glib answer, I pressed further, “Who in Heaven exactly?”.  His reply was surprising.  “Their names don’t matter.  Some have as many names as there are traditions.  Some have even more.   I don’t recognize them by their names, I recognize them by their spiritual profile – by the spiritual energy they project.”

Stunned into silence, I simply stared at him.  But as he explained his notions on this subject, I found myself mostly in agreement.  Let me try to explain his reasoning for  you.

We can start with an example from the Roman Catholic tradition.  In this tradition, one of the most revered and beloved figures is Christ’s mother Mary.  So beloved that she has been given hundreds of titles and different names – Our Lady of the Rosary, Our Lady of Mt. Carmel, and so on.  Many of these titles are associated with specific visionary experiences in which she appeared to a specific person.  On top of that, there are dozens of apparitions at specific geographical locations – Lourdes, Fatima, Guadalupe in Mexico, Akita in Japan, Quang Tri in Vietnam, etc.  The list is not limited to Europe, as you can see.

One thing you will notice is that when pictures of these apparitions are painted, Mary looks different depending on where she happens to have appeared.  In Akita, she looked Asian, in Guadalupe she looked Mexican, at Fatima and Lourdes she looked European.  Nobody of course seems bothered by these differences.  If you asked them, they would likely say that Mary takes on the appearance that makes her most accessible to those whom she visits.

Ok, so far so good.  But what if she decides one day to appear to a Buddhist?  What form should she take?  After a moment’s thought, I’m sure you would agree that following the principle of accessibility, our best guess is that she would take on the form of Kwan Yin (or Kannon as she is called in Japan), the bodhisattva of mercy and compassion, who plays a role in Mahayana Buddhism that is quite similar to the one she plays in Christianity.  In essence, they share the same “spiritual energy profile”.

In evidence of this, it’s worth considering the secret Christians of Japan, under persecution by the Tokugawa regime  from the 16th through the mid-19th centuries.  Desiring statues of Mary to venerate in their houses without risking detection, they carved hybrid images combining aspects of both Mary and Kannon (see accompanying pictures).  If detected, they thought they could plausibly claim to be simply venerating Kannon. The child on her lap in many of these statues, however, would likely have been a dead giveaway.

Here is how a friend of mine, a minister of the Jodo Shinshu school rather humorously put it (“Amida” is a particular Buddha, different from Gautama, who his reverenced by this school):

I, as Shinran did, address certain concerns to Kannon, the Bodhisattva of Compassion. I don’t, myself, exactly ask for things from Kannon. I do use her as someone to speak to, because Amida is too grand, or directed at too ultimate of ends, for me to chat with him about stuff like “You know I still regret dumping that girlfriend I dumped for the other girlfriend before the first marriage…”.

Or suppose this same spiritual being were to appear to a devout follower of Japanese Shinto?  Such people do exist.  This time the form would likely be that of Amaterasu, the Goddess of the Sun and mother of the Japanese people.  Here’s what Munetada Kurozumi, a Shinto priest of the early 19th century, had to say about Amaterasu:

The virtue of Amaterasu Ohmikami spreads over Heaven and Earth

So here we have 3 different religions whose adherents revere three different Heavenly persons.  The names are quite different of course, and their outfits too.  But as we can see, the spiritual profiles of these three persons and the roles they play in their respective religions are remarkably similar.

It’s worth considering the secret Christians of Japan, under persecution by the Tokugawa regime from the 16th through the mid-19th centuries.  Desiring statues of Mary to venerate in their houses without risking detection, they carved hybrid images combining aspects of both Mary and Kannon.

Can you see where I’m going with this?  The question pops up, and demands an answer.  Could these three “personas”, from different religions, all be ways of looking at the same Heavenly person?

I’m not talking about an archetype or an abstract principle like say the “divine feminine”.  I’m talking about a real (if spiritual) person, with a distinct personality.  One who is interested in our welfare, and under certain conditions is willing to interact with us in certain ways.  Could it just possibly be that all three religions have encountered the same spiritual personhood, and given this personhood a name and role that fits in with the rest of their beliefs and mythology.  Well, why not?  What’s the alternative explanation?

Things get even more interesting when we realize that the personas matching a spiritual entity aren’t even necessarily gender specific.  The story of Kwan Yin’s history will help us understand this.

Kwan Yin’s official role within Mahayana Buddhism is “the bodhisattva of compassion”.  A bodhisattva is different from a buddha.  A buddha gains enlightenment, and does not return to the merry-go-round of karma for another spin.  Walks off the stage if you will.

A bodhisattva, on the other hand, follows the path of spiritual enlightenment right up to the doorstep of enlightenment and then stops, to continue their presence among us.  Why?  To stay behind to help those of us who aren’t so far along.  The choice of a bodhisattva to remain behind is the ultimate act of altruism and compassion in the Mahayana tradition.  So it follows that the bodhisattva of compassion is deeply loved and revered.

But there is one interesting feature of Kwan Yin that we haven’t talked about yet.  Based on what we have seen so far, it might make a certain amount of sense to ascribe a female to this embodiment of infinite compassion.  But is it a requirement?  Apparently not, because Kwan Yin herself did not actually start out as a woman.

Mahayana Buddhism began around 100 – 150AD.  And at that time, a male persona named Avalokiteshvara was ascribed to this role.  The persona became female only when Buddhism migrated to China.  But this was not the end of the bodhisattva’s gender flip-flopping.  Even as late as 1204, when Shinran had his visionary encounter with Kannon at Rokkaku-do, accounts differ as to whether his encounter was with the female persona of Kannon or a male persona, that of Shotoku Taishi, a 7th century Japanese prince whom many revere as an avatar (or re-incarnation) of Avalokiteshvara.

Up till now of course we have focused on a single one of the citizens of Heaven, albeit a very important one.  But we know well that in many if not most religions, Heaven has a lot more citizens.  Think of all the saints, not to mention the nine choirs of angels, who populate the Christian Heaven.  Think of all the deities of various hues – yellow, blue, green, red and purple — that occupy their various points in a Tantric mandala.  Think of the amalgam of deities, starting with Brahman, and ranging from Vishnu and Shiva to the elephant headed Ganesh and the mercurial Kali.  What fun we could have laying out the personae of any of these Heavens and trying to find their suitable matches in other Heavens.

Our neighbor who appears to be following a completely different tradition may in fact be worshipping or venerating the exact same citizens of Heaven that we are, no matter how different the personae under which they appear might look to us.

Once you start thinking about the personas in this way, it doesn’t take long before you realize that the assignment of a persona, or the manifestation of some Heavenly personhood in a specific persona is a highly individual and personal affair.  There’s no real reason why someone who is attracted to, for example, both Jesus Christ and Kwan Yin, and possibly encountered both in their meditation practice, should not revere both.  No reason, of course, other than objections from self-interested religious institutions.  After all, it is the Heavenly person behind the persona who matters, not the costume they dress up in for any specific appearance.

There are two ramifications to this notion that we need to keep in mind.  First off, our neighbor who appears to be following a completely different tradition may in fact be worshipping or venerating the exact same citizens of Heaven that we are, no matter how different the personae under which they appear might look to us.

Once we accept this, it is only a short logical step to realize that we might learn a lot about the Heavenly persons in whom we are interested by studying what other traditions have learned about them, albeit in a different guise.  We can learn a lot about Mary by studying Kwan Yin.  And vice versa.  Looked at in this way, different religious traditions may have a lot more in common than we have thought, or  that their respective institutions have been willing to admit.

The second ramification is that there is little point in being too dogmatic about exactly who is up there in Heaven.  We know the general outlines of many of its primary citizens, but that does not mean the persona under which you encounter a specific Heavenly individual will be the same as mine.  The persona is only a medium of communication, a shimenawa, if you will in human form, to enable and foster intimacy and alignment between Heaven and ourselves.

It’s that intimacy and alignment with Heaven that matters, not the garb.  So please let’s not argue over whose personae are the “correct” ones – let’s pool all our knowledge to learn as much as we can about the persons behind the personae – the ones we really need to get to know and love.